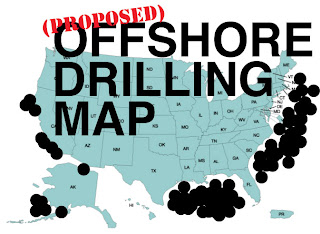 Here's my weekly column for the exciting media start-up NetGreen News. You can see all my columns here.

The Kerry-Lieberman bill, although given a slim chance of passing into law, was unveiled Wednesday and calls for a 17 percent cut in 2005 emission levels by 2020.

While those numbers can be argued about ad nauseum as to whether 17 percent is enough to keep us all from frying, the oil-drilling parts of the bill are something we can look at more clearly to determine a "yes" or "no" answer.

The bill allows states to veto drilling proposals that risk environmental degradation or that are within 75 miles of their shorelines. It would also allow incentives and revenue-sharing options for states to benefit from nearby drilling operations.

But let's take a step back. Other than the obvious calamity of what happened on Earth Day in the Gulf of Mexico, what's so bad about drilling in our own waters? The main logical and simplified arguments are that oil rigs make our oceans less beautiful on the surface and also contribute to the declining health of underwater ecosystems.

For an example of the latter, jellyfish are growing in alarming numbers because they require less oxygen than other climate-affected underwater life, thrive because of the overfishing of so many other species, enjoy clinging to hard surfaces in the water such as rigs, and are a growing pain for tourism and the many people increasingly being stung by the creatures.

If wind and solar alternatives are really possible, it makes a lot more sense for the U.S. to set a good example by not drilling everywhere it sees a fast buck and working with responsible countries to use the oil we still obviously require during a green transition. Further, almost all the non-industry-funded experts agree that gas prices for U.S. consumers will not decrease at all from offshore drilling in this country. There is also no solid evidence that opening the waters will create jobs.

President Obama said that his original plan to allow offshore drilling was "part of a broader strategy that will move us from an economy that runs on fossil fuels and foreign oil to one that relies more on homegrown fuels and clean energy." He didn't really give any other convincing reasons why this needs to be done. "Homegrown fuel?" Maybe this reduces our shipping costs, but it sure doesn't sound like something my gas tank is exactly thirsting after.

We live in a global economy where it makes sense to buy imports such as oil, which we keep saying we're trying to become less addicted to for greener alternatives. If Obama, Lieberman, and Kerry's plans to open U.S. coastlines to oil drilling is more than rotten Beltway politics, now is the right time to drill some benefits into the minds of a skeptical public.
Posted by Pop Culture Lunch Box at 11:49 PM