When You're Strange Is Fresh Look at The Doors 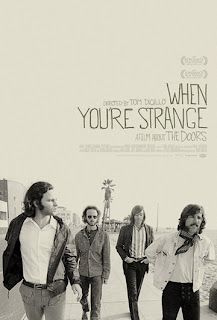 I'm not the biggest fan of The Doors in the world. I remember there was once this girl in my fifth-grade class who wore Doors shirts all the time, and we all just thought she was weird or potentially disturbed.

But looking back on her and her ratty shirts, I don't think we gave her enough credit. While some of the band's albums suffer from the monotonous tone of Jim Morrison's voice and the endlessly trippy wavering of the music, there is undeniably classic stuff sprinkled throughout. And, well, as for the basic legend of The Doors, I'm totally enamored.

I still think Oliver Stone's The Doors is one of the five greatest rock movies. And that would be hard to top, but the new When You're Strange comes pretty close. Originally narrated by filmmaker Tom DiCillo, his voice didn't cut it for festival audiences. So in stepped Mr. Movie Gold Johnny Depp (who was originally considered for the lead role in Stone's film before Val Kilmer got his role of a lifetime). His outlaw voice is the perfect fit, mainly because it's easy to forget it's Depp and think Morrison himself is giving us a tour of his life.

Pamela Courson, Jim's girlfriend, figures much less in this documentary than in Oliver Stone's classic. She is replaced with vivid footage of Morrison driving his muscle car through the desert, crawling around shirtless on rocks near a waterfall, and flopping around on stage in his black leather pants.

That much of this footage had never been seen before is nearly a crime. And it looks so fresh that some of it, especially the scenes of Morrison driving (culled from a film project he was working on), looks like reenactments. It's all real, and should be required viewing for anyone interested in pop culture.