Will Grayson, Will Grayson Is Latest Enjoyable Contribution to Teen Comedy Genre 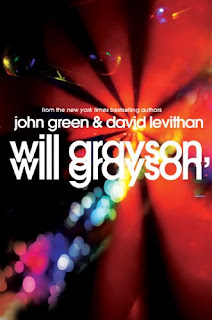 The latest book I finished was Will Grayson, Will Grayson, by John Green and David Levithan, who is well-known for writing Nick and Norah's Infinite Playlist. It falls into the same category as recent high-school classics I Love You, Beth Cooper and King Dork.

High-school kids simply make for great comedy characters, and there is no exception here. The title refers to the two protagonists (one gay and one straight) in this quick-read-of-a-novel. They have the same names and happen to meet up one night bizarrely and awkwardly in a porn shop in Chicago. They both find themselves drawn to a friendship with Tiny Cooper, an outrageously fat and gay tight end on the football team at straight Will's school. Tiny is producing "the gayest high-school musical ever" which also happens to be called "Tiny Dancer" and is his life history told through the lens of boyfriend breakups.

There is not a huge plot line, but the character development is excellent. By the end, there is a real sense of connection between the reader and the main players. And although the story doesn't necessarily flow effortlessly, there are plenty of humorous, enjoyable scenes throughout, including the one in which straight Will becomes the only member of the student-body Straight Gay Alliance and when he joins Tiny and friend/girlfriend/fellow-music-lover Jane to see Neutral Milk Hotel but gets kicked out of the club for having a fake ID that claims he's not old enough to get in.

And Maura is gay Will's friend until he finds out she has created his fake out-of-state boyfriend named Isaac in a lengthy online love affair. This incident results in the two Will Grayson's meeting.

Green and Levithan have come up with a creative work plan, in which one wrote the gay Will's chapters and the other handled the straight Will parts. In that light, the flow is surprisingly strong, and, in the end, the plot is not the really crucial element.

This is a good and funny read and well worth the time for mature teens and adults alike.