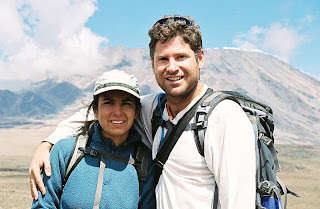 When my wife and I took our honeymoon to the top of Mt. Kilimanjaro in Kenya, we did it partly because we love adventure and partly because we figured it might be a once-in-a-lifetime opportunity to visit a place that would drastically change in the near future.

With global warming seemingly wiping out so many of the world's natural wonders, here's a select list of places to visit quickly before they are gone.

Mt. Kilimanjaro - The glacier at the top has retreated by more than 80 percent in the past 100 years and should be gone in the next 10. Glad I checked this off the list. It just wouldn't be the same without Hemingway's "snows of Kilimanjaro."

Great Barrier Reef - The "Blue Outback" is quickly becoming a dinosaur on this planet. It is largely agreed that extinction will happen by 2030 because of coral bleaching turning it white and brown, warming water temperatures, and acidification from carbon dioxide pumped out of our factories.

Amazon Rain Forest - Episodes of Johnny Quest as a kid have provided a lifetime of yearning by me to get to this massive land of beauty, and I may still have time yet. Reduced rainfall and warmer temperatures (along with the region's much-documented deforestation) are expected to decimate the Amazon, but possibly not entirely for another 80 to 100 years.

Hawaii - Higher storm tides will cause more frequent flooding and erosion of coastal areas. Many of the Northwestern Hawaii Islands and other Pacific lands are already being submerged and many more are expected to be under water by 2100.

Mt. Everest - As if this monsterous peak were safe to climb, it is now becoming almost impossible to mount due to reduced snowfall and melting glaciers. Sherpas are finding it more difficult to stick their ice axes and crampons into snow because much of it is now rock, which makes an extreme climb even more impossible.

Patagonia - Glaciers in this Argentina region have receded nearly a mile in the past 13 years. Forty-eight of the country's 50 glaciers are melting. That should make for a very different Patagonia if I ever get there.

Galapagos Islands - Dead coral reefs and warm waters are altering the ecosystem of Darwin's volcanic island west of Ecuador. Too much fishing and too many tourists have reduced the number of wildlife in the seas, which in turn is reducing the number of animals on land. The end of this era for the Galapagos will remove its allure as a destination.

Sahara Desert - This is the true definition of New York Times columnist Tom Friedman's catchphrase "global weirding:" the greening of the Sahara. Increased rainfall is slowly turning the desert back into the grassy savanna it was 12,000 years ago. It's not that I wouldn't want to visit a green Sahara, it's just that it would be pretty weird.

There are plenty of other places I would like to see before they disappear, including Micronesia, the Virgin Islands, and the Maldives. And there are plenty more endangered places that I would like for my grandchildren to see: New Orleans, New York, London, Tokyo, Death Valley, Indonesia, Glacier National Park, and Yellowstone National Park.
Posted by Pop Culture Lunch Box at 1:25 PM