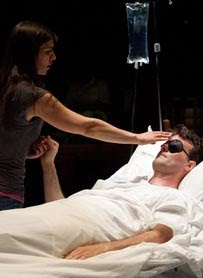 The best thing about Gruesome Playground Injuries, which just wrapped up an extended run at DC's Woolly Mammoth Theater, is that it's a star-making vehicle.

The rigors that face any two actors who win the two roles in this play are monumental. And Tim Getman and Gabriela Fernandez-Coffey (in a role originally performed by Selma Blair in the play's Houston debut) are monumentally great as lifelong friends who take care of each other while the world continually kicks them down.

Performed in the round of an ice rink, Getman and Fernandez-Coffey rarely leave the stage, making occasional trips to their makeup and costume areas while the audience watches and indie-rock, such as I'm From Barcelona, blares.

The physical workout these two go through is a joy to watch, as is the first hour, a hilarious comedy about how people sometimes have their timing all wrong and never quite connect, even when their fate of togetherness seems like it should be so clear.

The only problem with this already-short (at 90 minutes) production is that it overstays its welcome. Once we've already gotten the messages, Gruesome Playground Injuries continues to pound them in too forcefully. The laughs dry up in the final 30 as the story descends into a melodrama that I didn't see coming at all. It's strange that "bad-boy" playwright Rajiv Joseph would shift gears so dramatically.

That said, Getman and Fernandez-Coffey have arrived. As if these two young stars weren't already shining lights on the DC theater scene, this performance puts both at the top of the game. My advice: don't miss anything either of these two are in from now on.