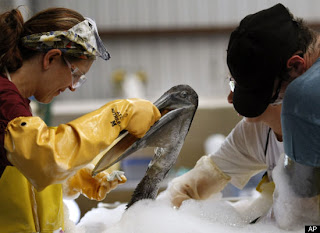 My beach reading on vacation last week was Dave Eggers' Zeitoun, the true story of a single family's experience in New Orleans during and after Hurricane Katrina. It got me thinking about all the amazing things some individuals must be doing in the fallout of the Deepwater Horizon oil spill in the Gulf of Mexico.

We don't hear enough in the media about these everyday heroes. But the bits that squeak out are certainly a lot more inspiring than the stream of gaffs out of BP CEO Tony Hayward's mouth. Here's a brief compilation of the best nuggets I've found online.

Don Abrams and Melanie Allen, friends from the Mississippi coast, launched OilSpillVolunteers.com after the disaster unfolded and, within hours, has more than 700 people signed up to do whatever necessary to protect the region's wetlands, estuaries, and barrier islands. Allen, a retired communications executive, remembered the damage in the early hours after Katrina and immediately got on the phone to drum up media interest about the gushing oil. Meanwhile, former engineer Abrams built the website.

Fifth-graders at West Main Elementary in highly impoverished Ravenna, Ohio, sold paper turtles and raised $300 to donate to the National Wildlife Federation. Other kids at the school "forfeited ice cream and popcorn to donate their quarters." The money will be used by NWF to help protect birds, fish, and other animals in the spill zone.

Dr. Heather Nevill of the Internal Bird Rescue Research Center has been handling some of the cleaning process by covering oil-slicked birds with Canola oil and bathing them in dish-washing detergent and water. The process takes at least an hour for each bird, with little guarantees of eventual survival.

Captain Alwin Landry and the crew of his offshore supply vessel, the Damon Bankston, rescued the 115 survivors of Deepwater Horizon by "repeatedly and tirelessly retrieved rig personnel from the burning Gulf waters into the rescue craft."

And we can't forget the 11 workers who were killed simply doing their jobs on April 20. Nine of them worked for rig owner Transocean and the other two were employed by a drilling company named MI-SWACO. Their surviving families were each presented with bronze hard hats at the memorial service.
Posted by Pop Culture Lunch Box at 3:41 PM