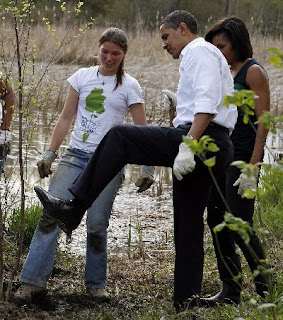 A little more than a year ago, I thought it was strange that President Obama showed up in fancy dress shoes at an Earth Day event that my wife was leading. He got mud on them while planting trees. Well, no duh.

Now, finally, he shows up on our Southern beaches nearly 60 days after Deepwater Horizon began spoiling the Gulf of Mexico. And it seems he may have gotten the memo. The work boots he's wearing in all his photo-ops look appropriate for the dirty job of cleaning up this mess.

Obama's boots also present a striking image of what's tragically become of these beaches, long white-sand stretches that used to be places for only sandals and bare feet.

This anecdote of Obama's footwear supports Maureen Dowd's June 15 column about the oil spill in The New York Times. She concludes:

"President Obama’s bloodless quality about people and events, the emotional detachment that his aides said allowed him to see things more clearly, has instead obscured his vision. It has made him unable to understand things quickly on a visceral level and put him on the defensive in this spring of our discontent, failing to understand that Americans are upset that a series of greedy corporations have screwed over the little guy without enough fierce and immediate pushback from the president."

I still vividly remember the hope I felt on the Mall in Washington DC the day Obama was inaugurated. And history will certainly show that he has been an improvement upon the disastrous presidency of George W. Bush. But that's an extremely low bar.

Obama has done an admirable job with the economic stimulus and health-care package. But he must find a way to quickly produce more economic relief, reverse the high unemployment rate, establish meaningful climate and energy policies, and take control of the Gulf quagmire.

Obama's national address on the Gulf response this week was uplifting, but like figuring out how to wear the appropriate footwear, it came disturbingly late. To say that we will "fight this spill with everything we've got" so long after the spill began seems almost laughable.

He was correct to classify the nation's worst-ever environmental disaster as a call to action to pass meaningful climate and energy legislation. Now is the time for oil companies like BP and ExxonMobil to gain incentives and work with government bureaus like the Environmental Protection Agency and the Minerals Management Service to make massive transitions toward cleaner energy production.

And while it pains me to join the bandwagon of disapproval for Obama, it's getting more difficult to stomach the Obama bumper sticker on the back of my car. I remember wondering how people could still have Bush/Cheney bumper stickers eight years after they were elected. Now I'm beginning to wonder the same thing about myself so soon into Obama's first term.
Posted by Pop Culture Lunch Box at 11:50 AM