Sandra Bullock Has Had Better Years 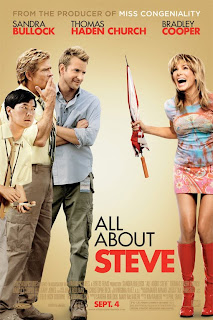 Legendarily lovable Sandra Bullock may have won best actress this year, but her woes easily outweigh her positives of the past 12 months. First, she has a pending divorce that is as nasty as it gets. Second, she forces me to watch All About Steve.

On paper, this less-than-Hallmark dud should be a classic. It features a stellar cast: Pre-Hangover Bradley Cooper (all good looks and vapid forgetableness here), Thomas Haden Church of Sideways (as the sturdy but cliche news correspondent), Ken Jeong (always far-out wacky but here wasted as a producer with no funny lines), and super-dork DJ Qualls as another completely-pointless character who drives a Gremlin and carves heads out of dried apples.

None of these side players have good performances. But stinkiest of all is Bullock. Her agent should certainly be fired, or at least seriously fined. It's amazing that she would take the role of a completely unlikeable idiot. There is no reason for the audience to cheer for her escape after ridiculously falling down a mineshaft. A happy ending would have been one in which Bullock, who never stops spewing meaningless crossword-bound trivia throughout the movie, all the while in her dumb red boots, would remain in the shaft forever.

Her rescue by the hunky Church is just plain unexplainable. Seriously, you should watch this film just to witness the absolute depths of achievement that Hollywood can accomplish. If the filmmakers were attempting to replicate Forrest Gump or Rain Man, they even failed in that endeavor.

At least all's well that ended well. Bullock won a Razzie for worst actress. The following day, she picked up best actress at the Academy Awards for The Blind Side.