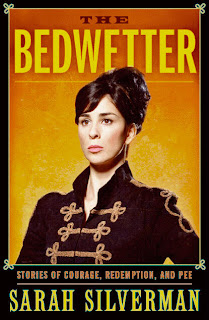 For those who think The Sarah Silverman Program is among the funniest TV shows of the last decade (along with The Daily Show, Arrested Development, Modern Family, 30 Rock, The Office, The Colbert Report, Curb Your Enthusiasm, It's Always Sunny in Philadelphia, Scrubs, and Chappelle's Show), then The Bedwetter is your book.

I'm (obviously, see the above list, which is indeed my own) included in this bunch. Sure, Silverman's show is laced with juvenile doodie jokes, but the cleverness and originality are cutting-edge and adorable. This autobiography (don't call it a diary, which is a form of writing the author determines should be either abolished or improved by about a thousandfold) is a personal history of her 39 years rather than a joke book.

But it is often hilarious and frequently biting, especially when it comes to FOX News, the right-wing media, and the Media Action Network for Asian Americans.

Silverman impressively bares all about super-personal issues. She doesn't drink alcohol but apparently smokes gobs of marijuana. She frequently goes through bouts of depression, and mostly keeps it together these days because of her Zoloft intake. She doesn't stop there. Plenty of text is given to her hairy arms and upper lip. As if that weren't enough to cripple her early confidences growing up in New Hampshire, her bedwetting well into her teens would have sealed the deal for most weaker people.

She makes some allusions to quitting the comedy game soon, but let's hope not. She is carrying on the traditions of Steve Martin, Bill Murray, and Chevy Chase in fine form. The depth of her material will hopefully sustain our comedy needs for a long time to come.