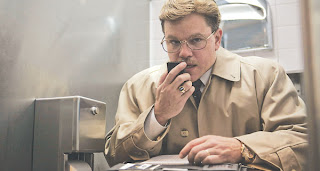 Matt Damon is his usual excellent self as Archer Daniels Midland executive Mark Whitacre, a man who rationalizes his way into becoming a long-time mole for the FBI in ADM's real-life lysine additive price-fixing scandal of the 1990s.

Damon is part of the top brass at the food-processing conglomerate and seems like an innocent, hard-working man from Midwestern Decatur, Illinois. His aspirations to become CEO become unhinged by what we later learn to be some serious mental bipolar issues.

The movie is based on journalist Kurt Eichenwald's articles in The New York Times about ADM. His other two books include one about the defrauding of 340,000 people by Prudential Securities and another about Enron called Conspiracy of Fools.

The Informant! is most interesting because of the light-hearted take on real-life events and a healthy dose of comedic actors like Joel McHale and Patton Oswalt playing somewhat-serious roles.

Much of this success is due to director Steven Soderbergh, who adds to his excellent portfolio of works such as Sex, Lies, and Videotape; Out of Sight; The Limey; Traffic; Ocean's Eleven; Bubble; and the above-mentioned Erin Brockovich. He is certainly one of cinema's top five directors.