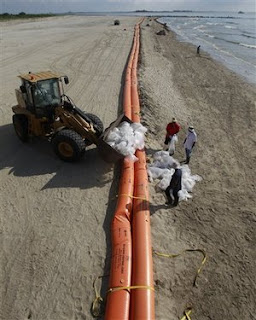 Here is this week's column for NetGreen News. All my columns are here.

With BP liable for a mere $75 million under federal law for paying oil-spill victims, President Obama recently announced the formation of a $20 billion escrow fund.

BP will have to pay damage claims out of this fund, which will in turn by administered independently by former Treasury Department "compensation czar" Kenneth Feinberg. BP will only have a say in claims of $500,000 or more.

One of the main goals of the fund is for shrimpers, fishers, and property owners to file for reimbursement through the fund rather than through lawsuits aimed at the oil company. This sounds like a smart course to take, and Feinberg certainly has the experience to lead the efforts, but just how successful have escrow funds been over the years?

This funding will be especially difficult to judge, as many businesses will have to prove their losses over tricky timelines with many gray quantifying areas.

But it can be done. Despite a major assault on the way he launched into thankless work on the September 11 Victim Compensation Fund, Feinberg eventually won over most of his critics and the fund paid out $7 billion to 97 percent of those affected. About 7,400 claimants received an average of $2 million each, certainly not the value of a loved one's life, but not bad either.

While not a government-backed escrow fund, $8 million in donations appears to have been distributed successfully to those most in need in the aftermath of the 2007 Virginia Tech shootings, which Feinberg also oversaw.

Only time will tell whether the escrow account is a government "shakedown," in the words of the House Committee on Energy and Commerce top Republican and chief anti-Earth spokesperson Joe Barton, or extremely smart handling by the Obama administration of corporate excess.

If history is a judge, the one-stop administered fund will better benefit victims and reduce lawyer fees in comparison to a one-by-one court-case handling of victim compensation. Even BP itself and, surprisingly, the American Petroleum Institute, have not fought the need for the $20 billion fund.
Posted by Pop Culture Lunch Box at 5:58 PM