Despite Setback, the Senate Should Press Forward to Pass Climate Bill this Year

The lack of blog posts recently is somewhat the result of starting a new job at The Nature Conservancy. It could also be the result of - it's just too darn hot to blog in DC in the summer! Anyway, here is the first writing I've had the pleasure to help draft at the Conservancy. It also appeared at the National Journal's website. Unfortunately, it's about how climate legislation failed to be enacted by the U.S. Senate last week. 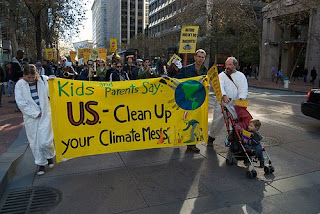 It is now clear that the Senate will not act on climate change before it adjourns in August for its end-of-summer recess. This is deeply disappointing for the many of us who have been working long hours over the last year-and-a-half to help design legislation that would greatly improve the lives of all the world’s citizens.

There will be lots of time for reflection, re-examination and, regrettably, some recrimination, but let me take this moment to make the case that the Senate can find a way to press forward. A bill may not be ready for Senate debate next week, but with the active engagement of the president, the deep reserve of talent in his administration, and senators from both sides of the aisle, it can be done this year.

Why should the Senate act this year? There are many reasons, but here are three:

1) The science keeps getting stronger. And the risks are increasingly more clear. A report released last week by the National Academy of Sciences concluded that humans are changing the atmosphere and oceans to such an extent that we are entering a new geological epoch, called the Anthropocene. What does this mean for us? Today’s hottest summers will be the future norm. And, with only a 2 degree Fahrenheit increase in temperature, 3-5 times more forest land in parts of the American West will burn each year.

2) America’s place in the world is at stake. For more than 3 generations, the world has looked to the United States to lead on major international issues. As the country with the world’s largest economy, and the one that has produced more carbon emissions than any other, the rest of the planet anxiously awaits a commitment from us on climate change.

That may be changing though. Increasingly, developed countries are looking to China for partnership, trade and even leadership on climate. And ironically, the Chinese press just reported that the country is moving forward to impose a domestic carbon trading scheme in order to meet its 2020 commitments.

3) The economy needs it – in the short run and the long run. Clarifying the rules of the road on carbon will drive innovation and stimulate investment, helping the economy get back on track. These days, most business leaders realize that something will have to be done about climate and energy. The question is, what? Until that question is resolved, investment dollars will sit idle or, more likely, go to other countries.

Take a look at this recent quote from Lew Hay, CEO of NextEra (formerly FPL Group), one of America’s largest utilities:

“We need some certainty about the economics. Are we going to have a price on carbon and, if so, what’s it going to be?”

He argued that the current uncertainty “puts a lot of investment dollars on the sideline,” adding that while FPL Group is hoping to spend up to $18 billion on nuclear power plant development, it will be difficult to proceed with the investment without greater certainty over the legislative landscape.

These are 3 reasons for the Senate to press forward, and for ordinary citizens to demand that it do so. But can it?

Yes, and here’s why:

First, an unprecedented coalition of businesses, labor, conservation and faith-based organizations has been clamoring for action. This isn’t just about the environmental movement. Electric utility and other CEOs have been vociferously arguing for carbon limits, so they can begin investing rationally with a long-term orientation. These business leaders prefer a legislative solution to the regulatory approach rather than the continued uncertain trajectory under an abandoned policy.

And let’s not forget that the House has already completed its work – more than a year ago, in fact. Senate passage of a bill, even a scaled-back one, would allow Congress to move forward with a conference and reconcile the two bills later this year.

Two more ingredients could be helpful to keeping this effort going through the hot days of summer: a visibly engaged President Obama and a visibly engaged public reminding political leaders that their future is at stake.