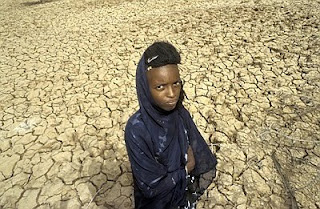 It is crucial that we begin to take "climate change" out of the abstract future and find cures for the Earth's ills now rather than sometime in our grandchildren's grandchildren's generation.

Perhaps the worse-than-dirty-toilet-like toxic stews brewing in the Gulf, in China, and in the Chesapeake Bay are not enough to stir developed-country citizens into action. But, even still, we've got nothing on the problems faced by "global weirding" (a more apt term than the poorly descriptive "global warming") for most Africans.


Increasingly unpredictable and extreme weather events in the backyards of Africans are destroying their abilities to depend on natural economic harvests from their land, lakes, and oceans. While the U.S. and other supposedly advanced nations argue over public opinion and political inaction, Africans are beyond tipping points and need to take real measures. The main problem is their lack of relevant, useful information that speaks directly to them.

Hopefully this changes a bit with a major report just released by the BBC World Service Trust and the British Council at the Africa Talks Climate Conference. The current mindset, the report authors found, from their interviews with more than 200 opinion leaders throughout the continent, is that Africans have a wealth of perceptions about the voluminous cases of extreme weather patterns, but very few connect it to the outside world's discussions of climate change.

Most, notably women and people in rural areas, attribute the impacts to the "will of God." Many attribute it to a form of divine punishment, which sounds eerily like public opinion in Africa at the onset of the HIV/AIDS catastrophe.

Terminologies about climate change have not translated well from the global stage to local areas in the 10 countries studied thoughout Africa. Most consider tree cutting and bush burning as greater causes to their troubles than the rest of the world's addiction to the harvesting of coal on land and water and the burning of it into our global and shared air.

There is real chance for politicians, global assemblies like the United Nations, artists, environmental non-profits, militaries, development organizations, and others working on the ground in Africa to begin speaking to Africans about ways to alter their daily activities in order to adapt to the ever-growing climate catastrophe.
Posted by Pop Culture Lunch Box at 9:30 AM