Michael Cera Tries to Be Superbad in Youth in Revolt

Michael Cera was arguably the highlight of a lot of great things in the TV series Arrested Development. He may not be as lovable in his film career as he was in the role of "George Michael," but he's had a pretty good start. 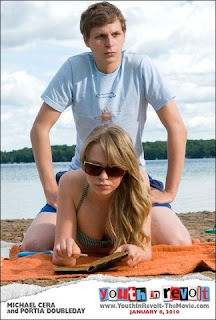 Superbad, Juno, and Nick and Norah's Infinite Playlist were all top-notch offbeat comedies (I still have yet to see Paper Heart and Year One). And now Cera gets his largest lead role as Nick Twisp in Youth in Revolt.

Nick lives with his loser mom and her truck-driving boyfriend (played with surprising tameness by The Hangover's Zach Galifianakis). They escape a problematic situation with some angry navy officers by moving to a religious trailer park, where Nick meets a flirtatious girl named Sheeni, played excellently by lovely newcomer Portia Doubleday.

The supporting roles are a mixed bag in the movie. Steve Buscemi and Ray Liotta turn in less-than-usual performances. But Fred Willard is hilarious as a kooky next-door neighbor, Adhir Kalyan is good as Nick's friend, and Justin Long is solid as Sheeni's druggy brother. And the movie gets big props for featuring a great song ("Popular Mechanics for Lovers") by Beulah, one of the most underrated indie bands of the 1990s.

All in all, Youth in Revolt is a fairly minor film. But it's a cute love story and there is fun to be had in watching Cera try about as hard as possible to be the bad boy he'll never be.