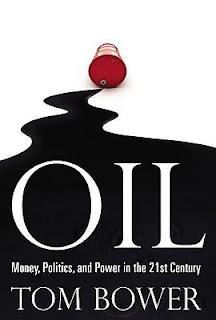 During the past 20 years, the price of oil has gone from $7 to $147 and the Gulf of Mexico, for one, has been transformed into a place that had been "classified as an area where inadequate technology prevented new oil from being found."

Along with dramatically rising oil prices and tech advances since 2003, mergers and acquisitions made by major players like Exxon CEO Lee Raymond and BP's Lord John Browne have "created a new arrogance and blindness toward the oil-producing countries, alienating their governments from granting the oil majors access to their reserves."

This topic is explored through an interesting overview of the landscape of corporate oil deal-making in Oil: Money, Politics, and Power in the 21st Century, by Tom Bower.

Rex Tillerson of Exxon was negotiating to acquire Yukos, which owns 20 percent of Russia's vast oil reserves. But while Tillerson and Raymond remained oblivious to Russian culture and sensitivities and "saw a greenfield site," Lord Browne of BP was well versed in Russian history and Vladamir Putin's ambition to use oil as a tool for reasserting Russia's role as a superpower.

Despite Exxon's ignorance, Putin has had no problem playing along with their game and bowing to every whim of oil leaders. He opened Moscow's Baptist church on a Saturday to allow Raymond's wife Charlene the chance to pray before they had to hurriedly return to the U.S. And when Charlene wanted to revisit a store to buy some wooden sculptures, the store was determined to be in a dangerous area and arrangements were made to set up merchandise in a comfortable private display area in a safer spot.

This kind of elaborate set-up for the comfort of oil leaders is replicated throughout the world. The impoverished nations in Africa, Asia, and South America have wealthy resources that are only realizable with Western marketing, organization, and technology. So company CEOs from BP, Exxon and other oil conglomerates are the true kings when they come to visit local leaders.
Posted by Pop Culture Lunch Box at 1:21 AM