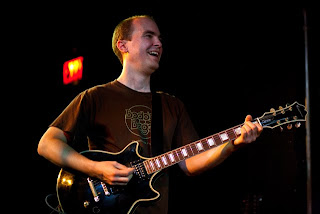 The Teenbeat Records 26th Anniversary Show at DC's Black Cat was a fabulous tribute to one of the world's truly underrated (and arguably DC's finest ever) record labels.

Mark Robinson is the label chief. While his albums with bands Unrest, Flin Flon, and Air Miami have mostly been outstanding, his performance on this night (July 10) was the same but surprisingly less jangly and more rocking than on record.
He played with all three versions of Unrest (the high school, college, and professional ones). Despite how geat the other label-mate bands were earlier in the evening, it was clear why Unrest was and always will be the head honchos of Teenbeat (although I've always had a very soft spot for Aden and Eggs as well).
There were many highlights to this DIY show, with a band called The Ronettes having a blast with songs they claimed to have not played or practiced in 15 years. They had a pair of jokey girls on bass and guitar and a big-haired male standing up while playing drums. A bald former high-school teacher of (I think) Robinson sang about his troubles a capella between band sets. And Versus was melodic and loud. And cool.
For more, check out my friend Fran's photos and article on DCist here. I attended the show with him, Meg, Jason, and Nicky.
Posted by Pop Culture Lunch Box at 4:42 PM