What Is Obama's Plan for Energy Independence? 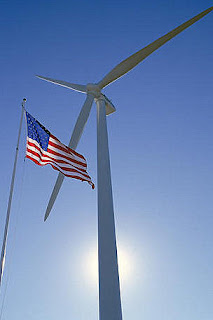 Here is this week's column for NetGreen News. All my columns are here.

We hear the term "energy independence" all the time, but what would it really mean for the U.S. to rely less on the global economy for our prodigious energy appetite?

Unlike the isolationism and post-apocalyptic survivalism that seem to be the focus of the anti-government, anti-globalization crowds, there are some obviously fundamental common-sense positives to energy independence.

Federal and private money aimed at clean energy start-ups is one of the paths upon which Barack Obama has been most vocal. As with many climate- and energy-related issues, this direction will not see true reflections in new jobs and economic recovery for several years. So while that might not help the president's re-election chances, solar power, electric vehicles, and a recent $11 billion investment in smarter grids are the correct choices for him to be preaching.

Along with the grid funding, the American Recovery and Reinvestment Act of 2009
will eventually provide more than $70 billion on tax credits and direct spending for programs involving clean energy and transportation. That includes $6.3 billion for state and local energy improvements, $5 billion to weatherize low-income homes, and $4.5 billion to make federal buildings more energy efficient.

Plus, the new National Fuel Efficiency Policy for cars produced between 2012 and 2016 will require an impressive average fuel efficiency of 35.5 mpg by 2016.

So Obama is introducing many welcome and important steps on the road to energy independence, especially in comparison to George W. Bush. His contributions included "thinking about energy independence" and exploring domestic natural-gas production.

"Energy independence" is good goal, but also an obviously ridiculous one. We will never be 100 percent independent, and if we were, it would probably mean a lot of suffering and Glenn Beck-like apocalyptic scenarios. With the term hijacked in a "drill baby drill," all-or-nothing fashion, it is finally time to stop using the term altogether.

"Domestic energy reduction" is a lot less flashy, but it is much closer to what people are trying to say when they talk about energy independence. And since nobody wants to reduce our iPhone-loving energy use, it is great that governments at all levels throughout the U.S. are thinking about how to do it for us.
Posted by Pop Culture Lunch Box at 10:00 PM