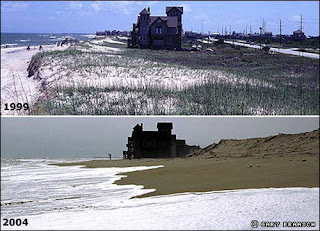 This is my last weekly column for NetGreen News. This retires a nice little run of 15 or so environment columns because NGN is ending its text-only blog and opting to become a video-only site. Should be interesting to see if they can become a major source for environmental video footage for mainstream media outlets. I wish them the best.

North Carolina is my favorite state. I love the Tarheels. I love the Eastern Carolina BBQ found at great restaurants like Wilber's, McCall's, and Parker's. The beaches, mountains, and Research Triangle are all tough to beat.

And I don't hold it against the citizens of the state that only 13 percent of voters there could identify “cap and trade” as legislation that would impact environment or energy policy. The findings were recently reported in a poll by the Civitas Institute.

Some other interesting findings in the poll:
- Fifteen percent of voters thought cap and trade was somehow foreign-trade related.
- Of the 13 percent of voters who were informed about the contents of the legislation, 7 percent negtively thought it would mean higher taxes on energy, while only 6 percent said it would help protect the environment. That's strange, even though it doesn't surprise me.
- Weirder still: unaffiliated voters were somehow more informed about the issue than members of either party. Seventeen percent of unaffiliateds were able to identify it as an environment or energy issue.

All this tells me that, once again, the environmental movement has not done a good job of framing the issues. Global warming, speaking more broadly, would probably be solved by now if it had been couched as a technological or military issue. We have no problem investing in those areas, but we're much slower to preemptively fund big environmental problems that might take years to eventually come back and haunt us.

Many environmental groups jumped quickly into trying to sell a policy called cap and trade. But most of the focus was on trying to influence big business and politicians. When those groups finally failed to fully embrace the idea, environmentalists realized they had forgotten to speak to the public about the importance of this economic policy mechanism.

Not that economic policy mechanisms are ever easy to sell to the American public. Family, friends, daycare, PTO meetings, a few minutes of NPR, and American Idol each battle for time in the mind of Americans each day. There's not a lot of room left for global warming. And there's understandably little room left for cap and trade.

No matter what you think of the merits of such a plan (and there is considerable debate in the environmental community), cap-and-trade credits would be much more palatable if it had a warm and fuzzy name like "clean air credits" and/or "delicious water certificates." Can you imagine a factory getting a seal of approval with something like that? It would be a pretty nice patch to have on the homepage of the website.

For now, for better or worse, we're stuck with the ghost of a good idea with a terrible name called cap and trade. And no national policy whatsoever to deal with global warming. Makes me want to go back to thinking about eating some Wilber's BBQ in Goldsboro.
Posted by Pop Culture Lunch Box at 11:12 PM