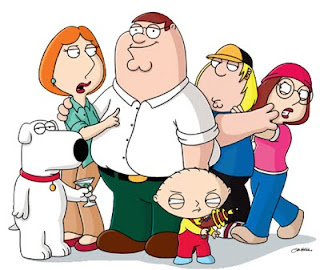 How have I never been into Family Guy? With its lightning-fast plot lines and witty vignettes mocking pop culture, I can barely call myself the Pop Culture Lunch Box Guy until I've given myself an education in this cartoon. A true slice of Americana for our times.

Already eight seasons old on the FOX network and like The Flintstones and The Simpsons on steroids, Family Guy is the story of the Griffins (father Peter voiced by the show's creator and former Hanna-Barbera animator Seth MacFarlane, mother Lois, dog Brian, and kids Stewie, Meg voiced by That '70s Show's Mila Kunis, and Chris voiced by Dr. Evils's son Seth Green).

Just to help you imagine how funny this show is: Last year, Family Guy was the first animated show nominated for an Emmy for best comedy series since The Flintstones in 1961. Not even The Simpsons could ever do that.

The show has been accused repeatedly of plagarism, but that's really the whole point. The show uses culteral icons at ever turn and its very essence is that it's a take on our wacky American ways. I'm watching Season One: Disc One, which, in the first two episodes, already lampoons Star Trek, E.T., and CHiPS, to name just a few.

Looks like I've got my work cut out for me if I want to see all the episodes. Luckily, the first episode starts with no back story and it appears to make no difference whether I watch episode #3 or episode #100 next.

Hulu's got a bunch of full episodes here. If there are any of you out there who haven't seen the show, check it out.

Email ThisBlogThis!Share to TwitterShare to FacebookShare to Pinterest
Labels: TV