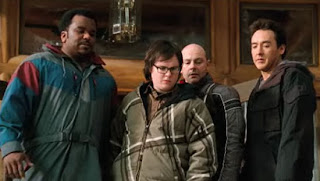 I knew Hot Tub Time Machine would be overwhelmingly stupid, but I was unprepared for the lack of laughs.

The movie serves as a vehicle for Rob Corddry, who had mostly so far been a bit player in movies like Old School, W., Semi-Pro, and Blades of Glory. Although he was brilliant in his four years at The Daily Show, Corddy is far from that here, even if he supplies the bulk of HTTM's very few laughs.

Craig Robinson (who is great in The Office) and John Cusack may be likable characters, but they both are stuck with writing that leaves them sleepwalking here. Cusack is nowhere near the inspired actor he was in Better Off Dead, which, along with Hot Dog The Movie, led the pack for greatest 1980s ski comedies.

With all its 80s imagery and references, this movie aspires to be cute and adorable like The Wedding Singer, but perhaps the big-hair mullets and neon-colored outfits have become so cliche that they're just not that funny anymore.

Clark Duke should be funny in a McLovin or Jonah Hill sort of way, but he's given virtually no funny lines. Same goes for Chevy Chase as the hot-tub repairman and Crispin Glover as the one-armed resort employee.

Hot Tub Time Machine isn't a total waste of time if you like really silly comedies, but it misses a lot of chances to be much funnier than it is.