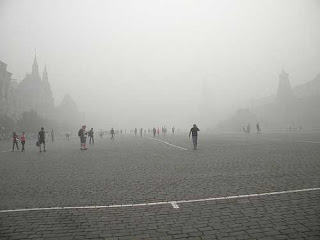 Nice article that appears at The Nature Conservancy's blog and in The National Journal. It is based on talking points that I drafted so that when all these crazy weather events like in Russia and Pakistan happen, our experts are always ready to talk about how weather relates to global warming. Enviros have not always spoken so convincingly on this in the past, at least not as convincingly as Big Oil lobbyists.

Have you been paying attention to the weather lately? How could you not?

After two months of record-breaking heat and withering drought, Russia is finally getting some relief. But not before extreme weather stoked wildfires that blanketed Moscow in choking smog, contributed to thousands of heat-related deaths and drownings, and shriveled one-quarter of the country’s wheat harvest.

Torrential monsoonal floods are still ravaging Pakistan, forcing as many as 20 million people from their homes and provoking concerns about political instability in an already unstable region.

Right here in the United States this summer, we have suffered heat waves and witnessed downpours — as much as 10 inches in just 12 hours — that flooded towns and took lives in Massachusetts, Tennessee, Arkansas, Iowa, and Oklahoma.

Coincidence? Probably not. Weird weather is giving us a preview of what climate change means for people.

All around the world, we are seeing hotter hots, wetter wets and drier dries. These extremes, in turn, are resulting in destructive wild fires, choking air pollution, ravaging floods, lost crops, lost homes and lost lives.

Data released from the U.S.’s National Oceanic and Atmospheric Administration (NOAA) and the National Climatic Data Center shows that June 2010 was the warmest month of June globally since record-taking began in 1880.

It was also the 304th month in a row in which average worldwide temperatures have been above the 20th century average. There is no question that our world is warming.

We are just left to wonder when, where and how the consequences will be felt. Warmer air makes for wilder weather because it holds more moisture. As warmer air masses move across the landscape, they can pick up more water from the ocean, from lakes and from the soil, creating drier conditions for crops and evaporating water supplies.

Eventually, what goes up must come down, as moisture-laden air unleashes deluges of precipitation – such as the torrential snows the East Coast experienced this past winter.

This is probably the point where I am supposed to remind you that any single weather event cannot be definitively linked to climate change. But that’s not the point. If climate is what we expect and weather is what we get, we need to start changing our expectations.

Record high temperatures are being broken twice as often as record lows; you would expect them to be equal if climate were steady. According the U.S. Global Change Research Program, over the last 50 years, heavy rainfalls in the Northeastern United States have increased 67 percent, and snowpacks in the Western United States are melting up to three weeks earlier.

These sorts of climate changes are serious business. Heat waves hurt air quality and threaten people’s health. Droughts shrivel crops and dry up water supplies. Floods wash away communities. As the news of the last few weeks has made so vivid, extreme weather costs money and costs lives. Climate change increases the odds that we will experience more wild weather and then suffer the consequences.

With so much at risk, we need to act now to stabilize the climate and safeguard our communities:
- We need policies that immediately reduce greenhouse gas emissions and wean us off heat-trapping fossil fuels and onto clean, low-carbon energy sources.
- We need to invest in protecting the world’s remaining forests that absorb carbon dioxide from the atmosphere and provide clean water and other valuable benefits.
- We need to help make nature more resilient to change so that people can keep counting on it for food, water, jobs, and protection from storms and floods.

We may not be able to control the weather, but, by strengthening nature, we can help reduce the odds that it will get more extreme.