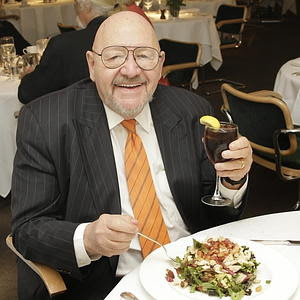 The smash success of the TV show Mad Men has really opened up the nation's romanticism of the good old days of office life that included daily doses of martinis, cigarettes, and sex.

While it all sounds fun, it also sounds pretty exhausting. But somehow advertising legend Jerry Della Femina survived the 50s, 60s, and every decade since, and is still working and telling us about how the TV show looks like Rebecca of Sunnybrook Farm compared to those days when he was starting his own firm.

Della Femina begins his memoir, From Those Wonderful Folks Who Gave You Pearl Harbor, remembering how agencies in the 1950s "were broken down among ethnic lines. The Mad Men flourished in large Protestant ad agencies [and] monopolized all the large advertising accounts (cars, food, cigarettes, soft drinks, beer). The other, small accounts (dress manufacturers, shoes, underwear, small retail stores) were regulated to tiny, 'Jewish' ad agencies." 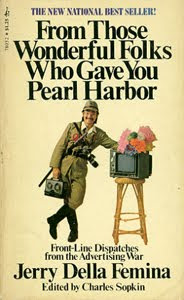 By the late 60s, the ethnic agencies, of which Della Femina had always been a part, had turned the tables and captured most of the primo accounts. The chairman of the Protestant Mad Men, David Ogilvy, even declared at a conference in 1968 that "the lunatics have taken over the asylum."

One example of the debauchery in the advertising golden age: "Thousands of people took part in the Agency Sex Contest. Everyone in the agency voted anonymously on ballots for the three people they most wanted to go to bed with. They were also asked to vote on the person of the same sex they would consider going to bed with. And, of course, there was the menage a trois category, in which they selected the two other people they wanted to go to bed with. Sometimes as many as 300 votes were cast.

"For one week [each year], the walls of the agency were covered with [sometimes nude] posters made by people who were campaigning for themselves." Winners shared hotel room suites for a weekend or a night and also were allowed to have sex on Della Femina's couch during a work afternoon.
Posted by Pop Culture Lunch Box at 1:42 PM