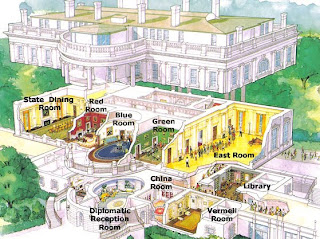 Eleven years living in DC and today I finally took my first tour of the East Wing of the White House.

Although I consider myself an eager student of U.S. presidential history, I hate to admit that the tour is just an OK experience. Probably the best things about the short walk are the historical photos in the entryway (including one of John Travolta dancing with Princess Diana and lots of White House pets), the inspiring glimpses of the backyard and the Jackie Kennedy Garden that frequently appear on the news, and the often recognizable furniture sprinkled throughout the half-dozen or so rooms on the tour.

The East Wing is essentially the president's living quarters while the West Wing consists of working offices. The current East Wing was added to the White House in 1942 primarily to cover the construction of an underground bunker, now the Presidential Emergency Operations Center. Around the same time, Theodore Roosevelt's coatroom became the movie theater.

Rosalynn Carter, in 1977, was the first to place her personal office in the East Wing and to formally call it the "Office of the First Lady." The first ladies have continued to similarly use the East Wing ever since.