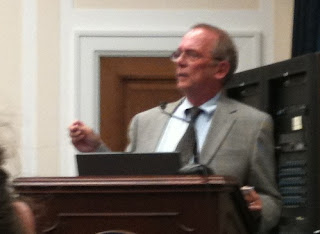 Climate science is filled with great metaphors, anecdotes, and characters. After all, what issue wouldn’t kill to have a day like Earth Day or an icon like the polar bear serving as brand managers?

The problem is that journalists, climate scientists, and others need to tell these stories better, especially in a rapidly shifting media landscape. These were some of the highlights of a panel today hosted by the American Meteorological Society on “Media and Climate Change” at the U.S. House of Representatives’ Rayburn Building in D.C.

Bud Ward (pictured) of the Yale Forum on Climate Change & the Media recommended that scientists adopt some of the best practices of communications and that journalists, in turn, will fare better if they are allowed to specialize in topic areas such as environmental sciences.

He said universities and science academies fail to prepare their students to know how to communicate the important science they undertake, which is extremely pointless if the public and politicians don’t know about the science, can’t understand it, or fail to avoid the pitfalls of a highly politicized topic like global warming.

One of Ward’s great tips falls in line with a blog I’m helping redesign and relaunch this month for The Nature Conservancy (more about that soon). He said when someone starts a conversation with, “I don’t believe in global warming,” ask them what their interests are. If they say, “I love my Hummer,” engage them on military and national security issues. Stop framing these kinds of discussions in terms of global warming. This is so important because climate relates to just about everything we care about.

Most people just don’t make the connections, and why would they? Climate is something way up in the atmosphere (unlike our daily weather) and seemingly generations away (even though it's already very much here). As co-panelist Tom Rosenstiel of the Project for Excellence in Journalism added, “It’s harder to know what to think than what to believe.”