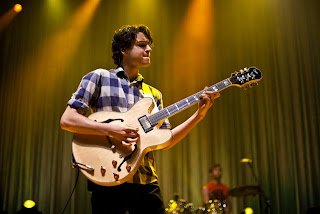 Vampire Weekend put on an exuberant late-summer pop show at Merriweather Post Pavilion on Saturday night. For the uninitiated, they are indie rock's answer to Paul Simon's worldbeat Graceland. They also reconfirmed their place as one of my favorite bands of the 2010s, right up there with Wilco and a reunited Pavement.

Baltimore's Beach House opened and was enjoyable, despite their songs being mellow and samey (and their lead-singing chick looking like one of The Really Rottens from Hanna-Barbera's Laff-A-Lympics).

My friend Francis Chung put it best in his review for DCist (and, even better yet, check out his great photos):

"Thousands screamed along to the infectiously rudimentary chorus of 'A-Punk,' and at the end of the main set, [Vampire Weekend lead singer Ezra] Koenig’s diction did not drip with disdain during the vibrant 'Oxford Comma.' The three-song encore began somewhat dubiously with 'Horchata,' before Rostam Batmanglij’s keyboards signaled the start of 'Mansard Roof,' an almost absurdly catchy song highlighted by Chris Tomson’s propulsive drumming. The evening concluded with a rousing rendition of 'Walcott,' as the audience collectively thrust its hands skyward in a euphoric response even Bruce Springsteen would probably be proud to get."