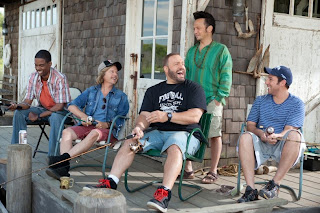 I wrote this in the air above the North Pole on Monday, October 19.

Adam Sandler’s movies may have been hit-or-miss in recent years, but there’s never been any denying his likability. Grown Ups ramps up that quotient considerably. And I thoroughly expect this group of comedians to make the exact same film in 25 years, only they’ll call it Old Dudes.

Grown Ups is daddy humor at its finest. And the message that kids need to get off their X-Boxes and iPhones and go play outside is both touching and apt.

Sandler, Chris Rock, Kevin James, David Spade, Rob Schneider, and Salma Hayek nail the chemistry. The jokes never stop being funny and light-hearted, as rich Hollywood agent Sandler leads his old basketball buddies on an outing to their former coach’s funeral and then to a lake property where they all grew up. The hit a waterpark, canoe, drink, watch a hot girl fix a car, and play a fierce and pathetic hoops rematch with their childhood foes.

Obviously, nothing much happens, but this is a really fun flick. The soundtrack is the topper, with choice deep album tracks from bands like The Kinks (one of my favorites of the Davies’ brothers, “Better Things”) and Sandler’s own excellent Dylanesque composition “Stan the Man.”