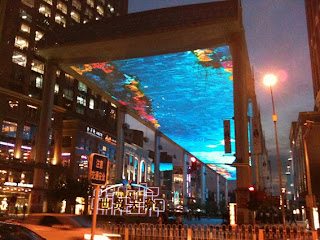 I originally wrote this on Thursday, October 21 for The Nature Conservancy's Planet Change blog.

Reading the China Daily newspaper in the cab on the way to the airport after 10 days working in the country, I was struck with the idea that China has a real opportunity to lead the world on climate change.

One article noted that “China’s clean energy market is open to all foreign players, and many foreign companies have built a presence in the market.” That seems like a fairly straight-forward news item. But think about it, could such a sentence be written about the U.S., where we increasingly seem to be weaving an isolationist cocoon from the glories that could accompany this moment in time of endless globalization opportunities?

General Electric’s turbines in China, for example, are generating major amounts of wind power there. Meanwhile, the article noted, “China has only exported three wind turbines to the U.S.”

While China certainly has the problems that accompany major industrialization and a massive reliance on dirty coal burning, I gained a sense of real hope while visiting China that there is still time for the world’s powers to get a grip on global warming.

In the many conversations I had with Chinese citizens and environment experts while working in Beijing and Inner Mongolia (where one of our tree-focused climate projects is kick-starting), there was confidence that China is learning from the lesson of previous industrializing countries. Also, China seems to still comprehend the importance of fundamentals.

A few other headlines from that edition of China Daily: “Rationality urged for students.” “Reform leading to good governance.” There was also an editorial urging Beijing leaders to improve public transportation in a city that welcomes more than 500,000 vehicles from outside the city limits every day.

These articles, I fear, would not make it to the top of U.S. newspapers, where news needs to be about something original, post-post-modern, or Lindsey Lohan.

This Chinese fundamentalism offers to be the saving grace for us all. Or at least for the Chinese, if the U.S. and our politicians don’t begin to think a little more globally.
Posted by Pop Culture Lunch Box at 10:59 PM