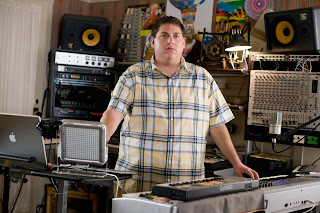 Cyrus is a sweet little indie drama with strong acting. However, it moves at an uneven pace, especially through its second half, when a good new romance between John C. Reilly and Marisa Tomei is complicated. The troubles come from Tomei's son, played in an aptly creepy manner by Jonah Hill.

The film seems to be some sort of statement against single-parent childrearing. While early-20s Cyrus has serious growth issues, Tomei's character clearly has had a role in shaping him the way he is, such as singing in the bathroom while she showers. Awkward.

There is also distracting camerawork throughout, with the quick zoom and pans used frequently these days in TV shows like Arrested Development and The Office. this seems to work better in those short formats, but it is tiring and neurotic over 90 minutes.

The acting ultimately saves Cyrus, but I was not nearly as enamored as many of the critics.