Even Through the Smog, The Great Wall is Still Great 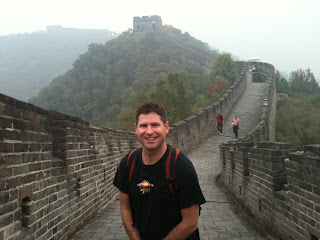 I wrote this in China on Sunday, October 10.

Today was my one vacation day of the trip and I couldn’t have been more excited to visit the Great Wall of China. I booked a van through the hotel and set off with a group of about 12 travelers from Canada, England, Malaysia, and Russia to the “Mutianyu” portion, which is considered the most well-preserved section and is located about 80 minutes north of downtown Beijing.

Our English translator answered questions for much of the drive. The Wall is about 5,500 miles long. Also, China’s one-child policy was initiated way back in 1978. Farmers are the exception. They can have a second child if their firstborn is a girl. This is because farmers need boys to help them. If they have a girl the second time, they are done and can’t try again. Parents are fined based on their salaries if they have a second child. The millions of trees lining the roads have white paint on their bottom four feet to keep pests away. When asked about the thick smoke, she called it “fog” and interestingly didn’t mention the rapid expansion of coal-based industrialization in the country. What was also surprising to me was that we saw no factory smokestacks on the way to the Wall.

I had figured the smoky haze would improve or even disappear once we got further from the city. But it never did, and visibility at the Wall suffered for it. It still seemed fitting, from a climate-change perspective, to be hiking along the number-one polluting country’s most beautiful and amazing treasure in a wall of exhaust.

We were allowed a little more than two hours to explore the Wall on our own. If not for the short window, I would have climbed the 1,000 steps to reach the Wall, but instead I took a terrifying cable car and got my hiking in along the top of the rolling structure, which was lined in this particular stretch by a series of watchtowers.

The afternoon rain held off until the return bus ride. We then stopped at a local “natural Eastern medicine” facility, where students gave us foot massages and a doctor told us about how Western doctors use machines to check the health of their patients while Eastern doctors use their hands and simply check the pulse and tongue. I was suckered into buying a prescription for slightly high blood pressure. But my regular doctor has told me before that I have high blood pressure, so I was willing to accept the two-month regimen that these doctors said would repair me for good.

I finished the day by going for a swim in my hotel's fancy indoor pool and then wandering the streets until I found a “hot and spicy hot pot” joint that had no foreigners in it. There was just enough English on the menu to convince me to give it a try. The hot and spicy pot was a huge bowl with tons of terrifying-looking red peppers and the rice, pork, broccoli, and kelp that I requested. It was delicious and nothing like the awful “Chinese food” Americans eat.
Posted by Pop Culture Lunch Box at 5:04 PM