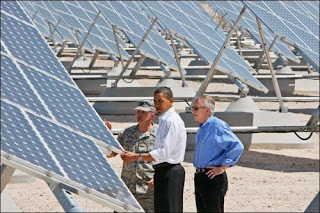 OK. I'm just now catching up with posting my Planet Change blogs here at Pop Culture Lunch Box. I wrote several earlier this month. This one appeared on Wednesday, October 6.

After author Bill McKibben and his climate activist group 350.org visited President Obama at the White House a few weeks ago, the administration was apparently convinced with the idea to re-install solar panels, which last adorned the building’s roof for a temporary time during the Carter administration. The sun-powered panels will heat water for the residential wing and provide some electricity, and is estimated to reduce the White House’s (and taxpayers’) energy bill by about $3,000 annually.

And it seems the president’s example is already having a domino effect. New solar projects are popping up throughout the U.S. and many more are expected to begin construction. Just this week, the first major solar plants to be built on federal land, both in the California desert, were approved by Obama’s Interior Secretary Ken Salazar.

Further, solar panels seem to be a solution to global warming that most reasonable people can agree upon. In a little-known footnote to the George W. Bush years, the former president, who uses solar panels at his Texas ranch, had them installed on a maintenance building and two other small structures on the White House grounds.

Photo by Charles Dharapak, AP
Posted by Pop Culture Lunch Box at 9:14 AM