A Reunited Guided By Voices Blowfishes Through the 9:30 Club 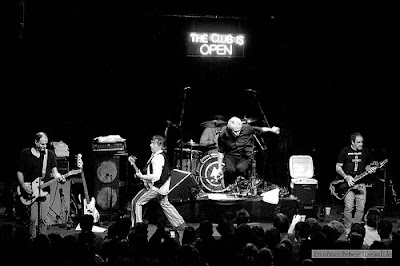 It's an honor to again have burgeoning rock journalist/photog featured on the site. Francis Chung (or "Fran," depending on who you ask) attending the boisterous Guided by Voices show with me last week. I give the show ****1/2 out of ***** stars. By most standards, it was an impeccable show. By GBV standards, it could have been longer than 2 hours and could have featured a slightly better setlist. But why write my own full review when Fran covered the bases so well in DCist. A check out the great photos at the Washington City Paper:

From the early 1980s until their breakup in 2004, Guided By Voices built a reputation as one of the great live acts in rock-and-roll. Armed with some of the best material in all of indie rock -- thanks to frontman Robert Pollard’s inspired, ultra-prolific songwriting -- GBV’s various incarnations consistently enthralled its loyal fans with dynamically shambolic, three-to-four-hour marathon performances fueled by massive amounts of alcohol. Expectations were high as GBV played a sold-out 9:30 Club on Thursday night with its recently-reunited “classic” (1993-96) lineup featuring Tobin Spout and Mitch Mitchell on guitar, Greg Demos on bass and Kevin Fennell on drums. The Ohio-based quintet delivered a solid, if surprisingly brief, two-hour performance that featured a sterling set list, but -- if only because it rarely achieved the exhilarating heights of past GBV extravaganzas -- ultimately felt like a slight disappointment.
With a neon sign behind him declaring “THE CLUB IS OPEN,” Pollard led his band on stage promptly at 9:15, swigging from a bottle of Jose Cuervo before launching the set with “Break Even,” “Pimple Zoo,” and “Shocker in Gloomtown.” Though neither the band nor the audience seemed fully warmed up, “Tractor Rape Chain” provided an early highlight, as fans fist-pumped and sang along to the song’s infectious chorus in an effort to get themselves properly fired up. The middle-aged musicians seemed to put forth their best effort, nodding to their trademark stage antics of the past while showing the inevitable effects of age. Pollard demonstrated some toned-down versions of his signature leg-kicks and mic-twirls while smoking liberally on stage, and Demos and Mitchell struck oft-awkward rock-god poses, frequently with cigarettes dangling from their lips. Notably, and to the possible detriment of their performance, the band drank with a relative moderation that would have been uncharacteristic fifteen years ago, with Pollard sticking mostly to beer and only occasionally reaching for the tequila.

The set list delved into all four of GBV’s albums from 1993-96 (Propeller, Bee Thousand, Alien Lanes and Under the Bushes, Under the Stars), and also featured deeper cuts off of singles and EPs from that period. Sprout showcased his own songwriting contributions, taking the lead on understated renditions of “Awful Bliss” and “14 Cheerleader Coldfront,” while his nostalgic “A Good Flying Bird” could serve as an apt manifesto for his band’s reunion tour, and a theme song for many of the aging rockers in attendance. Frankly, the middle of the set lagged a bit, with songs like “Queens of Cans and Jars” and “Gold Star for Robot Boy” lacking some of the energy and swagger one might expect from a GBV performance.

It really didn’t feel like a “classic” Guided By Voices show until late in the main set, when the snarling guitar chords of “Watch Me Jumpstart” seemed to kick the proceedings into a higher gear. With the alcohol taking full effect both on stage and in the crowd, a rousing club-wide shout-along ensued during the anthemic climax of “Echos Myron.” It was arguably the high water mark of the show, and GBV followed it up with perennial favorite “I Am a Scientist” before sending the crowd into its fullest frenzy during a spirited rendition of “Game of Pricks,” a 90-second gem which remains one of the greatest songs in the genre of indie rock.

GBV returned for three encores, pushing the song total for the evening to 40. “Postal Blowfish” and “Don’t Stop Now” bookended the first encore, while the second was highlighted by the ever-irresistible “Motor Away.” Finally, the mini-epic “Weed King” from Propeller brought the festivities to a satisfying conclusion. Few would argue that it was the best GBV show they’ve ever seen, but Thursday’s performance nonetheless offered a nostalgic opportunity to celebrate one of the best American bands of the past several decades, and to see them play together in D.C. for perhaps the last time.