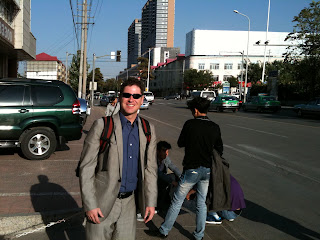 I originally wrote this on Sunday, October 18.

My group of work friends (somehow all guys) returned last night from a once-in-a-lifetime trip to Henninge’ er, Inner Mongolia, the province that straddles China’s northern border with Mongolia.

We stayed for two nights in a largely marble joint somewhere between Ghengis Khan-style palace, mafia getaway, and The Shining hotel. Billed as The Shengle Club, it is located inside a planned community of stone and slightly-falling-apart McMansions and has its own indoor clay tennis courts, massive indoor pool, table tennis, billiards, a movie theater, full soccer pitch with NFL-caliber turf, and four really nice bamboo-floor bowling lanes.

We were entertained by the owner of the entire complex, Mr. Niu, over a wonderfully excessive lunch at a round twirling table of meats, dumplings, vegetables, huge glasses of yogurt, local vodka-like liquor, and wine. Our Nature Conservancy colleague and China climate manager Ma Jian read an email on Mr. Niu’s phone from none other than Bill Gates and Warren Buffett saying they are looking forward to visiting him in Inner Mongolia next year.

We also played tennis with Mr. Niu, who owns the local milk factory that we toured. His company, Mengniu, is the largest milk producer in China and (surprisingly only) the sixteenth largest in the world.

Mr. Niu is also replanting trees all over the land adjacent to his milk factory to help repair the drought-stricken and eroded, dusty land. With his hands seemingly everywhere in this almost Mars-like landscape east of Inner Mongolia’s biggest city, Hohhot (at a mere 3 million population), Mr. Niu is a co-sponsor of The Nature Conservancy’s reforestation project a little further out of Henninge’ er.

Our project is in its beginning phases and is relatively small, covering only about 20 square miles of a mountain that equates to about a third the size of Washington DC. The important thing to note about the Inner Mongolia project is that it will feature high-quality, sustainable, and well-researched tree planting, an element that is often overlooked in a country that plants an amazing amount of trees and admirably fights global warming successfully as a “carbon sink,” but also plants many of the wrong trees in the wrong places.

We have also opened a branch office of our China climate program in Inner Mongolia, so look for much more news in the near future about this work over at the Conservancy's newly relaunched website called Planet Change.
Posted by Pop Culture Lunch Box at 5:27 PM