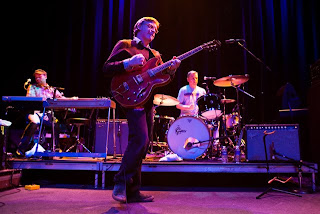 Seeing as I attended this show with DCist photographer and writer Francis Chung and discussed many of these elements with him at the bar afterward, there's not much sense in writing my own review. Fran has done it exceptionally well, so the following is his version of a show by a band I haven't seen live since their show with the Afghan Whigs in St. Louis that was so long ago I can't find any reference to it at all on the Internet.

Hot on the heels of Pavement's retrospective set at the Virgin Mobile FreeFest, local concert-goers were treated to another dose of indie-rock nostalgia on Saturday night, as the 9:30 Club hosted an all-Scottish twin bill featuring Teenage Fanclub (pictured left) and The Vaselines (pictured below). 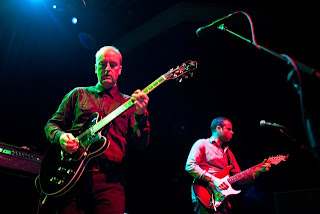 The Vaselines' Eugene Kelly and Frances McKee released two relatively obscure EPs and one LP in the 1980s, and broke up (as a couple and as a band) before Nirvana gave them a measure of fame by covering three of their songs, including a remarkable unplugged rendition of "Jesus Wants Me for a Sunbeam." On Saturday night, the Glaswegians dutifully delivered all three of the Cobain-interpreted songs for which they still best known. "Son of a Gun" sounded as charmingly catchy as ever, with Kelly and McKee trading boy-girl vocals over a steady backbeat and jangly guitars, and Teenage Fanclub's Norman Blake joined them onstage for a slightly slowed-down version of "Molly's Lips," tooting a bike horn during McKee's falsetto chorus.

Aided by a laudably crystal-clear sound mix, the band sounded exceptionally tight both on older classics, like the audience-requested "Dying for It," and newer songs like "I Hate the 80s" and "Sex with an X," the title track from their recently-released second LP. As befits a band whose songs are replete with sexual innuendos and naughty double-entendres ("Monsterpussy," "Rory Rides Me Raw"), The Vaselines sprinkled their set with plenty of hilariously lewd banter. McKee was in a particularly bawdy mood, inviting fans who came for Teenage Fanclub to retire to the loo "to have a wank" during her band's set, and later giving an excursus on the dermatological benefits of semen and...well, things reached arguably unpublishable levels from there, so perhaps it's best to leave the rest to the imagination.

Kelly and McKee's antics were a tough act to follow, but Teenage Fanclub was more than up to the task. Indeed, the Glaswegian quintet -- which features not one, but three talented songwriters -- is one of those bands that's so accessibly good that it's genuinely surprising that the've never achieved more than moderate commercial success, though both the band and its fans seem comfortable with their underdog status. Their superb 19-song set showcased the outstanding musicianship and pop songcraft that has earned them extensive critical acclaim and a devoted cult following. Opening with "Sometimes I Don't Need to Believe in Anything" and "The Past" from its latest album, Shadows, the band kicked the energy level up a notch when bassist Gerard Love led them through "Star Sign" from Bandwagonesque, famously ranked by Spin Magazine as the best album of 1991 (ahead of Nirvana's Nevermind and My Bloody Valentine's Loveless).

Primary frontman Norman Blake resumed vocal duties on "Alcoholiday," another standout track from Bandwagonesque, while guitarist Raymond McGinley took his turn on "About You" from 1995's Grand Prix. The band played flawlessly throughout its set, displaying gorgeous vocal harmonies and dynamically mellifluous guitar work worthy of their heroes, Big Star -- although the sound engineering was unfortunately not quite as good as it was during The Vaselines' performance. Nonetheless, fans were ecstatic to hear classics like the irresistible "Sparky's Dream," and, at the end of the main set, almost everyone in the club seemed to be singing along to the indelible melodies of "The Concept." Teenage Fanclub returned for a four-song encore, playing "Can't Feel My Soul," "Sweet Days Waiting," and "Did I Say," before concluding the evening on an appropriately nostalgic note with its first single, "Everything Flows."
Posted by Pop Culture Lunch Box at 8:43 PM