Upon Arrival in Beijing 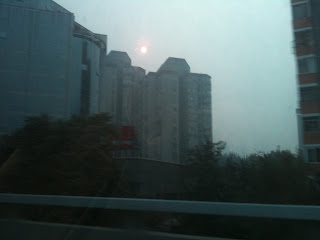 I wrote this up on Saturday, October 9, but then realized I had no access to my own blog in the land of the Great Firewall. So now I'm finally getting around to posting some missives from my recent 10-day work trip to China.

Walking off the plane and into the Beijing airport, I was immediately struck by how smoggy it was outside. Even stranger: the inside of the airport has a layer of smoke in it that I couldn’t decipher. Either it was cigarette smoke or factory smoke, most likely quite a bit of both.

After grabbing my luggage and some yuan (cash), a man approached me for a taxi. I accepted even though I wasn’t totally sure he was legit. I grew a little suspicious when we waited for an elevator and he stuck one of his long fingernails up his nose only to bring it back out with a whopper. Hopefully that’s not stuck to me suitcase somewhere.

Any way, he was a nice enough fellow and shuffled me into a cab. I gave my booger buddy the money (he said he was the boss), he told the driver which hotel to go to, and then he was gone in a flash.

We drove for about 45 minutes and I was shocked when I realized we already appeared to be downtown. I hadn’t even noticed the tall buildings through the haze that was so thick that visibility beyond the roads was pretty non-existent.

Around 3 p.m. Saturday (3 a.m. back home). I arrived at Jianguo Hotel, an upscale place with a lagoon surrounding it and all the comforts of a fancy home-away-from-home. I sluggishly worked for a couple of hours in my room on a press statement from The Nature Conservancy’s international climate policy director about the Tianjin, China climate talks, which were wrapping up as my plane landed and seemed to be progressing as slowly as ever. At one point, I literally dozed off for about 30 minutes and woke up just in time to approve the statement before a colleague sent it off to an interested reporter on deadline at the South Chin Post.

Then I hauled myself into the shower and out the door to take a stroll down the block, slightly trimming back my initial plans to hop on the subway about five stops down to the famed Forbidden City. I was approached by several ladies selling messages, socks, and other products that I didn’t want, but they were all pretty civil and not too annoying. Although I was interested in getting some Chinese food, I figured it would be a good night to settle my stomach into the scene, so I went with a Thai place that offered me a tasty red curry chicken.

I’m booked for a tour in the morning to the Great Wall.
Posted by Pop Culture Lunch Box at 9:27 AM