Brad Pitt Misses a Primo Role in The Fighter 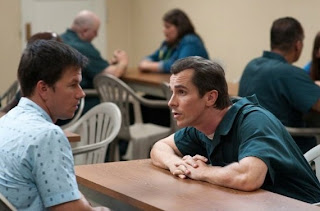 Not that I would usually recommend replacing Brad Pitt in any movie role, but the stroke of genius in The Fighter is the casting of Christian Bale. He plays real-life Lowell, Massachusetts boxing great Dicky "The Pride of Lowell" Eklund, known for knocking down the legendary Sugar Ray Leonard in 1978.

Pitt was originally cast in the role that Bale nails, thanks to his perfect ability to play a lanky, unhinged, drug-addicted creep. He luckily becomes sympathetic as the film progresses. And his little brother, Micky, played By "Marky" Mark Wahlberg and Micky's girlfriend, played by Amy Adams, show enough individuality from their mom and all the big-haired weirdo ladies hanging around their family house that you have to come to cheer for them.

Fittingly, Wahlberg (in his best performance since 2006's The Departed), Bale, and Adams are each up for Golden Globe Awards. All three are deserving of awards, although Bale is probably the only one who's a lock to win.

The fight scenes are all great as well, even though the pattern of "losing then suddenly coming back to win" is now beyond trite in the boxing genre.