If Evan Dando Ever Needs a Backup Guitarist ... 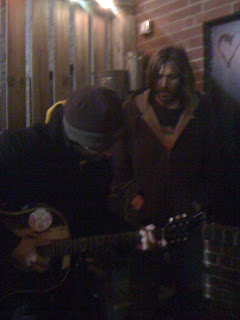 As an added bonus, Fran and Rachel and I bumped into Evan outside and hung out with him awhile. He's such a nice and down-to-earth guy and, as you can see in the photo, even let me strum his "bass heavy" acoustic guitar for a bit.

He talked to us about how his best friend is Keith Richards' son and how he's the godfather of Keith's grandchildren (he has their photos stuck on his guitar). I told him I had put The Lemonheads' "Outdoor Type" on the first mixed-tape I ever made for outdoorsy Rachel.

Throughout their show, Dando and Hatfield's voices matched up beautifully as always, with choice selections including the Velvet Underground's "Pale Blue Eyes," "Somebody is Waiting for Me," "Ride with Me," Teenage Fanclub's "Cells," "Brain Damage," "Evan," and many tunes off the most-classic Lemonheads' album It's a Shame About Ray. A pretty similar set list is here.

Great idea for Dando to have encouraged the "semi-retired" Hatfield to get back out on the road. Hopefully they tour together more than just this brief trip.