Jackson Brings the Funny as Tahoe Trip Winds Down 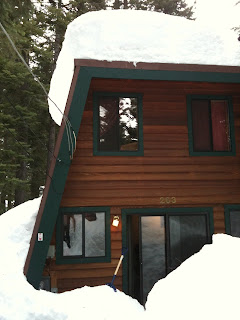 Again, I still can't believe how much snow there was on our trip to Lake Tahoe. Check out the drift on our rental house in the photo to the right, and that was on our last day there after the snow had already done some serious melting. You could barely see our house from the road.

After our blizzard-like day of skiing at Homewood on Day 1, we had a brutally windy Day 2 at Alpine Meadows.

But then, as you see in the rest of these photos, Day 3 at Heavenly on the south side of the lake was probably the most perfect day I've ever had for hitting the slopes. Heavenly looks down on the brown valley of Nevada on one side, the 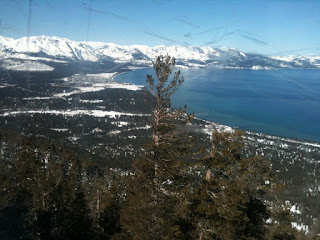 lush forestry of California on the other, and the crisp blue lake in the middle.

Jackson was a trooper. He didn't ski at Heavenly, but had fun hanging out in the lodge, climbing the snow banks (pictured), and riding up the massive Gondola. He was great on the flights as well, entertaining everyone who was interested. (He is becoming quite the cheeseball entertainer, and took full advantage of the stage at Alpine Meadows to put on a show for me with his plastic toys and makeshift puppet gloves and socks.) 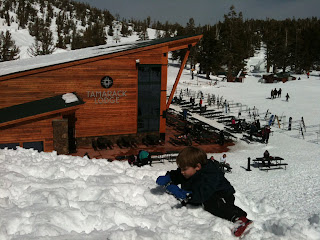 On the way back, we had a layover in Phoenix so Rachel asked a Southwest attendant if she could have a 24-hour stay so Jackson could see her grandmommy's Scottsdale house for the first time. I had to get back to work, but it worked out well for them. I'm told Jackson was very good, checked out everything in the house, asked nicely for a jellybean, and held grandmommy's hand everywhere they went.

They went to Target and bought clothes and bathing suits, since it was not anything close to Tahoe and DC weather there. Grandmommy wanted to buy Jackson a $50 bike, 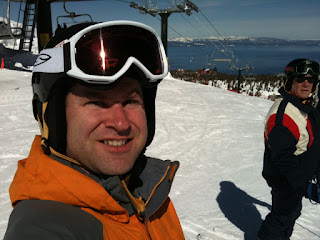 but he instead wanted some tiny toy hammock with a bear in it for $3. Grandmommy and Jackson were up till 11:30 in the kitchen together and she was very impressed by his utensil-sorting skills and engineer-like mind. He walked throught the whole house with a flashlight finding new things to look at.

When Rachel told him she was tired, he said, "You can' t sleep, you'll miss all the fun things I'm going to do tonight."
Posted by Pop Culture Lunch Box at 11:53 PM