Winter's Bone Opens Door on Meth World of the Ozarks 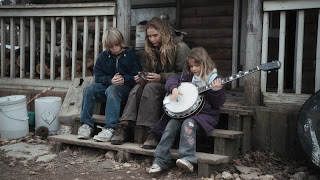 Winter's Bone was a darling of the awards season, but apparently not for the depth of the thin plot.

However, the inside look at how patches of Heartland America are being torn apart by meth labs, dealers, and addicts was certainly the eye-opener for elite Academy voters, who nominated it for best picture.

Life is tough for Ree Dolly, played with genuine Ozark-Mountains wherewithal by relative-unknown Jennifer Lawrence. At 17, she takes care of her two younger siblings while her mother dwells in their shack, no help and staring blankly into the ether. We don't learn what happened to her, but it obviously had something to do with her no-good missing husband.

Ree needs to find her father to keep a bail bondsman from taking the family's property. So this leads her to have to deal with her father's meth-world associates. Not a pretty or nice bunch.

Well worth enjoying, but, at the same time, a little painfully slow and uneventful. Not as fun as all those canoe rides I took down Missouri's Current River in my youth.