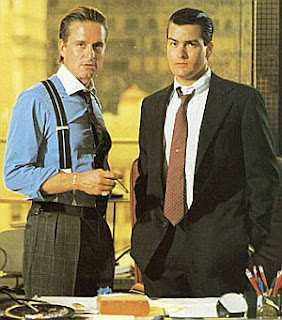 Cliches permeate Oliver Stone's 1987 film Wall Street. But then again, many classic movie lines like "greed is good" do the same.

Slicked-back, only-in-the-80s hair for Michael Douglas as financial king Gordon Gekko. But then again, this was probably the best decade of my life and I can't help but feel tons of nostalgia.

Like in another Stone classic, Platoon, young Charlie Sheen is the centerpiece as Bud Fox and there might not be a scene in which he doesn't appear. It's a brilliant performance by him. Douglas, who won the Academy Award for best actor, and Martin Sheen as Charlie's do-gooder dad come in a close second.

Daryl Hannah, a highly idealistic actress (see the video I made with her last December in which she asks us all to stop eating fish for the good of the planet), is an odd choice as the materialistic interior designer who plays everyone's girlfriend and doesn't seem to be having much fun with her role. She even won a Razzie as worst actress that year. Sean Young, who was amazing in another 80s-excess flick called The Boost, apparently lobbied to fire Hannah throughout production so that she could play the role with the right amount of 80s unethical flair.

Stone was inspired to make the movie by the memory of his father, a stock broker during the Great Depression. Wall Street is subsequently said to be hugely influential in building a generation of insider-trading-minded business workers. We might never have had Enron and Bernie Madoff if not for this glamorization of heroic corruption.