Got an iPad? Get These Apps 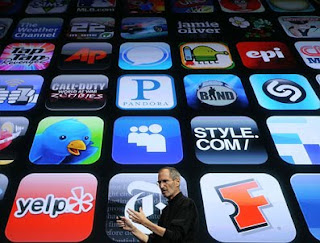 A friend asked me how I like my iPad, and which apps he should get when he buys his own. I've had this magical device, which I didn't actually know that I needed until I bought it, for about six months now. And this is what I like:

If you read magazines, get Zinio. You can subscribe to magazines on it. Sporting News Today is awesome. I also subscribe to Rolling Stone and Spin on it.

Reeder is perfect if you have a Google Reader account, which is an RSS feeder that allows you to bring all your web sites to one page so you don't have to try and remember checking them all the time. Reeder also allows you to bypass the New York Times' new paywall, because there's a "Readability" button that brings up the entire article within the Reeder app without having to go to the Times website.

Kindle is obviously key for reading books. It's much better on iPad than on the actual Kindle.

I checked out The Daily for a bit. I believe there's still a 14-day free trial available. It's a cool iPad only daily newspaper, but it's published by Rupurt Murdock and I just eventually couldn't take its dumb and slightly conservative leanings. Great idea though.

Read It Later is good, and allows you to save any long articles online for later so you can read them offline whenever you like (which is especially good for long-form journalism in magazines like Vanity Fair and The New Yorker).

Twitter and Friended are good for social media. StumbleUpon is fun for discovering interesting corners of the Internet. Netflix is amazing for streaming movies instantly if you have an account.

Remote is really nice, as it turns your iPad into a remote control for your iTunes account and stereos.

Ultimate Guitar allows you to see and save the guitar tabs and lyrics to just about any song. I've actually been learning other people's songs (instead of always just writing my own songs) for the first time because of this app.

And, finally, I haven't checked it out yet, but apparently all the old Atari games are available now through one, single app. Whenever I find some downtime, I'm going to be all over that.
Posted by Pop Culture Lunch Box at 3:45 PM