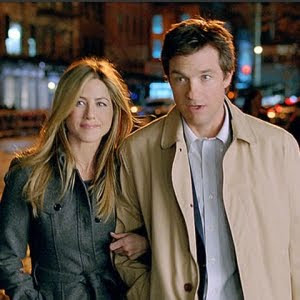 I'm a chick-flick guy, but this may have been over the line.

Somehow, two Jennifer Aniston movies landed at the top of our Netflix queue, which happened to be a pretty sure-fire way of pushing our luck.

We watched the first one a few nights ago when we were in Tahoe City, California and, I have to admit, I've already quickly forgotten most everything about The Switch. But I do remember liking it. Quite a bit. Jason Bateman can almost do no wrong for me. The former Arrested Development star plays Aniston's best friend and, one drunken night, he switches the donor's sperm with his own. Several years pass before he realizes her child is his as well.

This movie, based on a Jeffrey Eugenides (The Virgin Suicides, Middlesex) short story is, somehow, funny. It works. 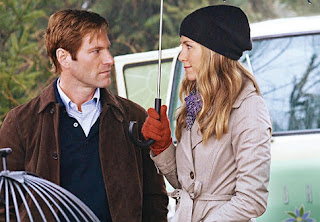 Back home, Love Happens is the "pushing our luck" part. At least we didn't pay movie-theater prices.

While Aaron Eckhart and Aniston try to make us care, the Hallmark-Channel script drags these actors to new lows.

Eckhart, who was so good in Thank You for Smoking, plays a self-help guru who helps people deal with loss. But he is slow to let Aniston into his own world.

It's not funny. It's really condescending to our emotions. And it's one of the least original plots imaginable. Two writers even sued the filmmakers, claiming the script was stolen. Hopefully the worst movie I'll see in 2011.