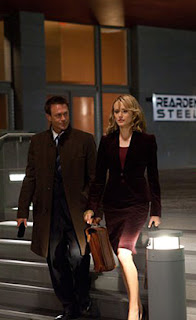 The lack of any stars in the movie adaptation of Ayn Rand's Atlas Shrugged was a pretty good sign, only a few minutes in, that this movie would stink. But the lack of stars probably had more to do with the fact that 95 percent of Hollywood wouldn't want to touch this film, released on Tax Day and heavily promoted by Dick Armey's Tea Party-affiliated anti-tax organization Freedom Works.

Angelina Jolie, Charlize Theron, Julia Roberts, Anne Hathaway, Russell Crowe, and Brad Pitt were among the stars who dropped out along the way. Surprisingly, the no-name actors don't do a horrible job. It's more like it's not directed well and is just kind of laughable in a Lifetime mini-series sort of way. OK if you got sucked into it while on the couch, but a little insulting to have been subjected to in a public movie theater.

Making this movie part one of a trilogy only adds to the painfully anti-climactic ending. That said, I'll definitely Netflix the next two parts. As an admitted fan of Rand's The Fountainhead (I've never read Atlas Shrugged), the author's brand of "objectivism" and libertarianism is fascinating.

Not that her writing has a lot of nuance, but it has great characters. And the movie clearly has strong characters. The problem is the nuance is mostly lost. But Rand's mind tricks, like the best science fiction, bring interesting and creative twists to reality. With Atlas Shrugged, it appears that railroad owner Dagny Taggert and metal industrialist Hank Reardon are able to keep their ambitions on course because they won't give up. They are fulfilling their objectivist, individual passion. Meanwhile, other top CEOs "shrugg" and fall by the wayside. They are letting the world down. The story, set in the future, shows sympathy for rich people, disdains poor people (although not enough to ever physically hurt them), and shows how crummy the world would be if rich people weren't so rich.

I'll give it this: you don't see humanitarians made to look evil in Hollywood too often. I wish I could give Atlas Shrugged a better review so that it doesn't look like I'm making a partisan attack, but ...