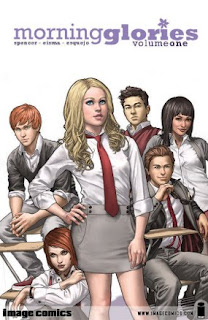 As I mentioned recently, I've discovered that graphic novels are the perfect answer for a person who doesn't have as much time to enjoy reading as many great stories as he used to (you know, parenthood).

Speaking of great stories, the last graphic novel I finished was Morning Glories Volume One: For a Better Future, from Image Comics. One of the first things I look for in a graphic novel is compelling cover art. This one, at first glance, looks like a simple prep-school story for adults, which in itself can often be a winning formula.

But what really got me more interested was that the characters looked slightly off, mysterious, and puzzling. The lack of description about what this story is all about added to the intrigue.

As one reviewer at Amazon notes, this is Lost meets The Breakfast Club. Six celebrated kids, who happen to all have the same birthday, arrive at a prestigious prep school. On the first day, the teachers and students set about trying to kill them and generally make their lives hell. 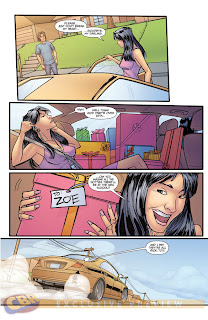 There is also a monster that sweeps in with no rhyme or reason to stick his hands through the brains of random people at random times.

The interesting thing is that this doesn't appear to be yet-another teenage vampire tale. Through the first volume, I have no idea what it's about. But it's a page turner, and the characters are built so strongly and with just the right of scheming against each other that I'll definitely return to read subsequent volumes of this mysterious thrill ride.