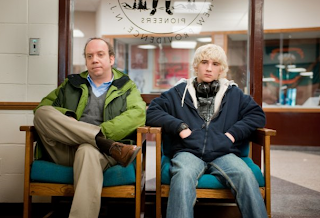 Tom McCarthy, who directed The Station Agent and The Visitor, is back with a phenomenal little film about a small-time New Jersey lawyer who gets himself into a lot of trouble with his decisions to play God to an old man and his dysfunctional family. Win Win is about how complicated life really is even though it seems so simple.

But all his moves make us completely sympathetic to him. And it helps that the lawyer is played by Paul Giamatti of Sideways fame. He still plays the same lovable schlump here, but instead of wine tasting, he is fixated on keeping his family afloat amid hard economic times. The characters around him are also lovable, if somewhat buffoonish: his Bon Jovi-loving wife (played excellently by Amy Ryan, who was Michael Scott's voice-impression-doing love interest in The Office) and Bobby Cannavale as an assistant wrestling coach who just needs a distraction and seems to want to relive his high-school days.

Alex Shaffer is Kyle, the talented wrestler who serves as the center of Win Win's galaxy. He does a great job, and this should be an early front-runner for best picture.