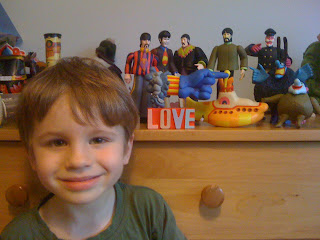 Jackson (pictured left) loves the Beatles and R.E.M. and I think action figures are pretty sweet. Well, I have yet to find a Michael Stipe figure, but The Beatles' Yellow Submarine figures became a necessity.

I had originally planned just to get my favorite Beatle, Paul. But Jackson had other plans. Once he got that, and saw on the box that there were figures of the other three Beatles as well as the Blue Meanie, Jeremy Hilary Boob PhD (aka The Nowhere Man), Fred the Submarine Captain, the Glovey Lovey, and the submarine itself, it was all over.

As you can see behind him in his room, we now have the entire set (a couple of hundred dollars later). Jackson has progressed to the next stage of wanting doubles of all of them, and also the Lord Mayor. But the company inexplicably didn't make a figure of him (Jackson knows him from the bedtime book we have of the Yellow Submarine).

Luckily I can sidetrack him with the box of baseball cards I just bought him.
Posted by Pop Culture Lunch Box at 10:16 PM