James Franco Cuts Off Arm, Thrills Us With Delusions in 127 Hours

James Franco may have bombed as host of the Academy Awards, but he added to his impressive movie-character resume with his Academy-nominated performance in 127 Hours as outdoor adventure seeker Aron Ralston. 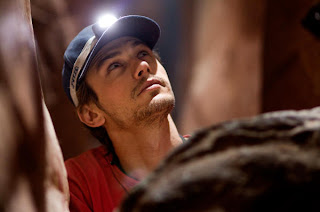 Much like his roles in Pineapple Express, Knocked Up, and Milk, he nails the laid-back and delusional persona. And it only gets better for Franco, who stars in what looks to be a tremendous upcoming Rise of the Planet of the Apes.

127 Hours is a beautifully filmed exploration of Canyonlands National Park in Utah as well as a very likable mountaineer's mind and thought process through the very difficult decision to cut off his lower arm to dislodge himself after a harrowing 127 hours caught by a fallen and unmovable rock.

It's pretty impressive how gripping this film is, especially considering that the only dramatization added to what is essentially a documentary was the scene in which he shows two female hikers how to jump into a deep pool beneath the rocks.