Sicko Indie Rockers Get Loud at Rock and Roll Hotel 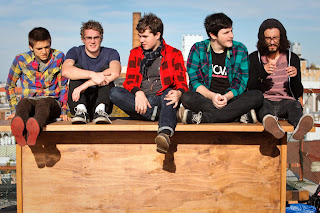 The band got onstage and looked all of about 18 years old each. Which made it all the more surprising when they proceeded to manhandle their guitars into a mesmerizing combination of screeching and melodic feedback. With pounding, rapid-fire drums chugging away and impressively loud vocals, Surfer Blood was like a combination of The Smiths, Vampire Weekend, and The Pixies.

"Floating Vibes" kicked off the set and Pitchfork's Number 37 song of 2010 "Swim" near the end highlighted the hour-long performance.

Surfer Blood pranced and sang through the jubilant crowd during its set. Meanwhile, Austin headliners ... And You Will Know Us By the Trail of Dead did the same during their mind-poundingly loud part of the show. The only difference was that the Trail of Dead were much darker and gothic, and the crowd seemed totally different up near the front of the stage. For Surfer Blood, it had been harmless college indie hipsters. Now it was transformed into a slam-dancing pit of metal lunkheads.

While I love all of the Trail of Dead's album, I was underwhelmed by the lack of hooks in their live show. The four-piece was exceedingly tight, but much of their material consisted of unenjoyable jams. The songs that worked best were the very short ones, even when they were no more than two minutes of guitar wankery. At least they were more to the point.

Email ThisBlogThis!Share to TwitterShare to FacebookShare to Pinterest
Labels: And You Will Know Us By the Trail of Dead, Austin, DC, Music, Pixies, Surfer Blood, The Smiths, Vampire Weekend