The Beginning of Summer in Photos 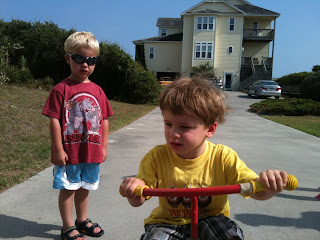 I haven't been blogging as much as normal. And since a picture tells a few words, perhaps it's easiest to give you an update of how my summer is starting off with a few shots.

It's already somehow been three weeks since the family returned from our annual pilgrimage to Emerald Isle in the Outer Banks, North Carolina. Jackson had a great time this year getting to meet his cousins from Nashville: 3-year-old Andrew (pictured, watching Jackson ride his bike in front of our beach house, the same one we've rented out for the past three years) and 5-year-old Alexander. 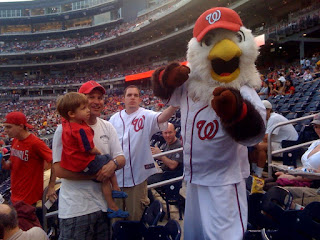 Last week featured a lot of America's Pastime. My St. Louis Cardinals were in town. Unfortunately, the Washington Nationals were in the midst of a rare hot streak and swept the three-game series. Good thing I'm a Nats' fan as well. The Tuesday night game I saw with my friend Jeff included the return of Ryan Zimmerman to the Nationals' lineup after a lengthy injury. It didn't seem like it was going to make much a difference when the Cardinals were up 6-1 after homers from Albert Pujols and Lance Berkman. But the Nats rallied for an 8-6 win. It was one of the most exciting games I've ever seen. Luckily I skipped Wednesday's 10-0 game. I returned with Jeff again, as well as Rachel, Jackson, Theo, and others from Rachel's work crowd, for a thrilling walk-off win by the Nationals. And, as you can see in this photo, Jackson was happy to have met Screech and try his first cotton candy, which gave him plenty of energy to stay up well past the time when we got home, after 11 p.m. 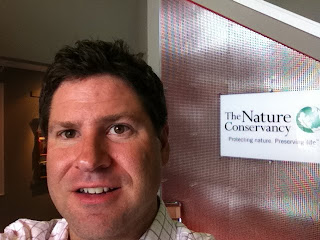 And finally, I just returned from a quick trip to the Ohio office of The Nature Conservancy in Dublin, outside of Columbus. I didn't have time to explore the city (Ohio's largest), but did have some pretty good pad thai and ice cream in the 'burbs. We're exploring starting a public-education campaign on climate change in that state, which is experiencing more extreme drought conditions around its crown jewel, Lake Erie.

Hope everyone is having an equally busy and entertaining start to your summers.
Posted by Pop Culture Lunch Box at 12:20 AM