July is For Family Fun 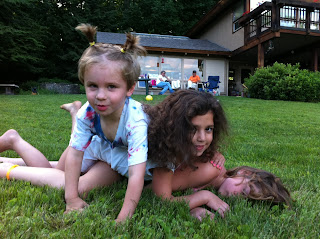 July has been filled with some nice family time. The month started off in the Adirondacks at Rachel's grandmother's lake house. The picture to the left is Jackson (wearing devil's horns) and his cousin Julia ganging up on their older cousin Hannah. 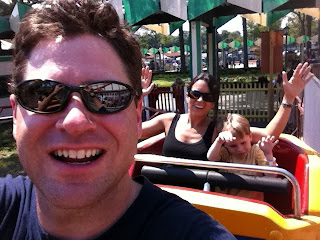 We also went to Fairfield, Connecticut last weekend for our cousin Stanton's 60th birthday. The party was on the beach there and we stayed at our cousins James and Ellen's beautiful house in Pound Ridge, New York. This is an area we could really live. It's got the more mountainous feeling area around James and Ellen's place (which Rachel would like) and the beach (which is more my style). 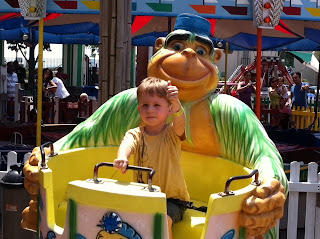 This was also a chance for me to narrow down the number of states I need to get to. Connecticut was a new one for me. So now the list is five: North Dakota, Hawaii, Alaska, New Mexico, and Rhode Island.

While in Connecticut, we took Jackson to his first amusement park, Rye Playland in Westchester. He gave it thumb's up, as you can see in the photo. And it was a good warmup for me, as the little rollercoaters hopefully got me back into shape for the big ones that are sure to be headed my way as soon as Jackson gets a little taller.
Posted by Pop Culture Lunch Box at 9:57 PM