What F. Scott Fitzgerald Had Against Jelly Beans 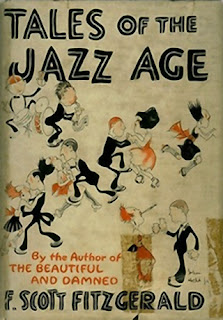 An odd thing: Over the years, I've read hundreds of short stories by a handful of my favorite authors (Poe, Vonnegut, Fitzgerald, Hemingway, Capote). But, other than a few select classics, I rarely remember them.

One of the reasons I started Pop Culture Lunch Box was to jot down things I should remember from the things I read, watch, or see. Kind of like an, uh, journal. So my next endeavor is to reread F. Scott Fitzgerald's Tales of the Jazz Age and try to remember it so I never have to read any of its lesser short stories. (As a bonus, the Kindle edition is free at Amazon, even though the Library Journal review there curiously calls the collection "nice if you can afford it.")

The first story, "The Jellybean," takes place in small-town Georgia and was apparently co-written by Fitzgerald's wife Zelda. The Jelly Bean is 21-year-old Jim Powell, who is immediately described as an unappealing character coming home from the war in trousers that are too short and too tight.

He is invited to a party with his childhood friend Clark Darrow. Clark has lived a full social life and is a sought-after commodity by the ladies, while Jim is completely stunted and detests girls just as he had as a boy before the war. At the party, Clark asks Jim if he thinks Nancy Lamar, a girl who does "crazy stunts" and is dating the son of the owner of a safety-razor company, looks beautiful.

Somehow, Jim and Nancy end up sharing some strong drinks and a chat later in the evening. It's not long before she kicks aside her chair and stands up to announce her devoted love to Jim Powell - whom she calls King of the Jelly Beans - to the entire party.

Well, Nancy is obviously very drunk and that's pretty much where her night ends. But Jelly Bean leaves the party and walks the streets thinking about a successful woman Nancy had told him about and how unmotivated he'd been so far in life. He later tells Clark that he has decided to stop being a bum, go fix up his aunt's farm, and start a family.

But just a little while later, Jim the Jelly Bean turns into a pool hall on Jackson Street "where he was sure to find a congenial crowd who would make all the old jokes - the ones he knew."

This is a pretty depressing story, but at the same time, it's a brilliant look into how delusional we can be. Moments of brilliance and great ideas often flash past us, but only the truly motivated people turn those moments into something substantial. The other people are, well, jelly beans, which I guess in Fitzgerald's world means the ordinary people who don't stand out in a crowd in any way and float through life as just another jelly bean in the jar.